Interactive resources you can assign in your digital classroom from TPT.

2 Digit Addition and Subtraction {THE BUNDLE} 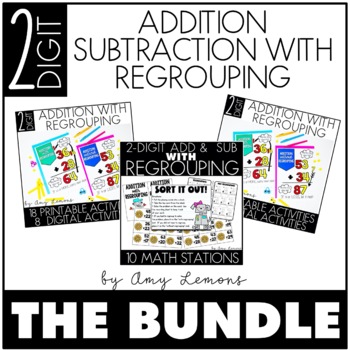 This Double-Digit Addition and Subtraction Unit Includes the following three units (if you have already purchased this unit please do not purchase the bundle!!):

I Can Regroup Centers

I Can Regroup unit includes: (There are 11 Math Centers/Games in this download)

--> Addition (with and without regrouping) Games/Centers:

Looking for more regrouping activities? Check out below!

Are you getting the free resources, updates, and special offers we send out every week in our teacher newsletter?